The 19th of Kislev, the New Year of Chassidism, is one of those occasions that attract more than the usual number of visitors to the city of Gadyach, Ukraine. Countless pilgrims are attracted to this city every year at this time, gathering to pay tribute to the Alter Rebbe, Rabbi Shneur Zalman, who was buried in Gadyach. 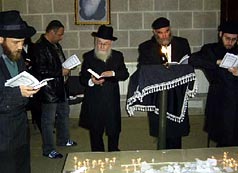 This year, more than 300 people gathered in this city on the Day of the Rebbe’s Release, an event which is celebrated by the followers of Chassidism worldwide.

Chief Rabbi of Ukraine Azriel Chaikin and Chief Rabbi of Odessa Avraham Wolf were among those who made the pilgrimage to Gadyach on this day, along with the Chairman of the Federation of the Jewish Communities of Ukraine, Rabbi Meir Stambler and Kharkov Rabbi Levi Raitzes. Rabbinical students from the USA, Canada, France, Great Britain and Ukraine also traveled to Gadyach to pray at the grave of Alter Rebbe, the founder of the Chabad Movement.

After a morning prayer, participants walked to the Rebbe’s Ohel through cemented stairs, built with the generous support of a local sponsor, Mr. Tzitziashvili. The visitors spent more than two hours at the grave, praying and singing Chassidic melodies.